NOTE: This is a Flash 'rendering' of the KEEL dynamic graphical language. This represents an approximation of what one sees when developing the reasoning models with the KEEL Toolkit. The KEEL Toolkit includes a collection of system engineering, reporting, and support tools to assist in the design, testing, visualization, and packaging of the cognitive models.

Advice: It is strongly recommended that you contact Compsim (262) 797-0418 to request a short introduction to this demonstration if you are interested in learning how this language works, including additional features not shown in this demonstration.

The View Combo Box allows you to select different views of the language. The designer could have created "named views" (not used in this example). Parent and child views area also available. For example: Select the Importance Icon for Action 2:

The KEEL Dynamic Graphical Language allows the user to interact with the logic before committing the design to production.

The relatively simple wiring constructs of the language allow very complex relationships to be established with relative ease. The immediate feedback provided to the user supports a rapid development and test process.

And, unlike the human written and verbal language, it is completely explainable and auditable; just like a mathematical formula. It does not require a mathematician, however, to audit the results.

The vertical bars at the top of the window above represent outputs that can either be exposed to the external environment or can be used internally. Outputs represent relative (analog) decisions or actions. The height of the output bars is an indication of the importance of this piece of information (decision or action).

The vertical scroll bars, grouped below the outputs represent inputs. The indicators above the scrollbars (red and green) indicate whether they hinder or drive the output they are associated with.

The wires shown in the window define how information is related. In the development environment, these wires are created with simple drag and drop mouse actions. As soon as inputs and outputs are dropped on the screen and as the links are made, the system reacts to the simulated inputs (the scroll bars). In this way the designer can see immediately how changes in the inputs propagate through the system. Unstable designs are caught by the design environment.

NOTE: You can manipulate the design by interacting with the Flash rendering of the design at the beginning of this webpage. In this case, the model was saved as Flash Actionscript as a KEEL "engine". This engine was then used to control the interaction between the Flash objects, just as if one was manipulating the graphical objects within the KEEL Toolkit. The only difference is that with the Flash rendering, we have not allowed you to edit or change the design. 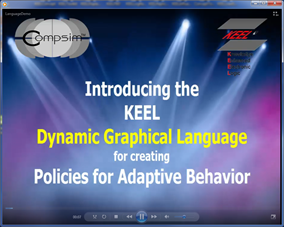 For an introduction to those without Flash, or those that may want a little more background than just reading the text above, click the image above for a video introduction.